A tale of Percy and Bob Too of course 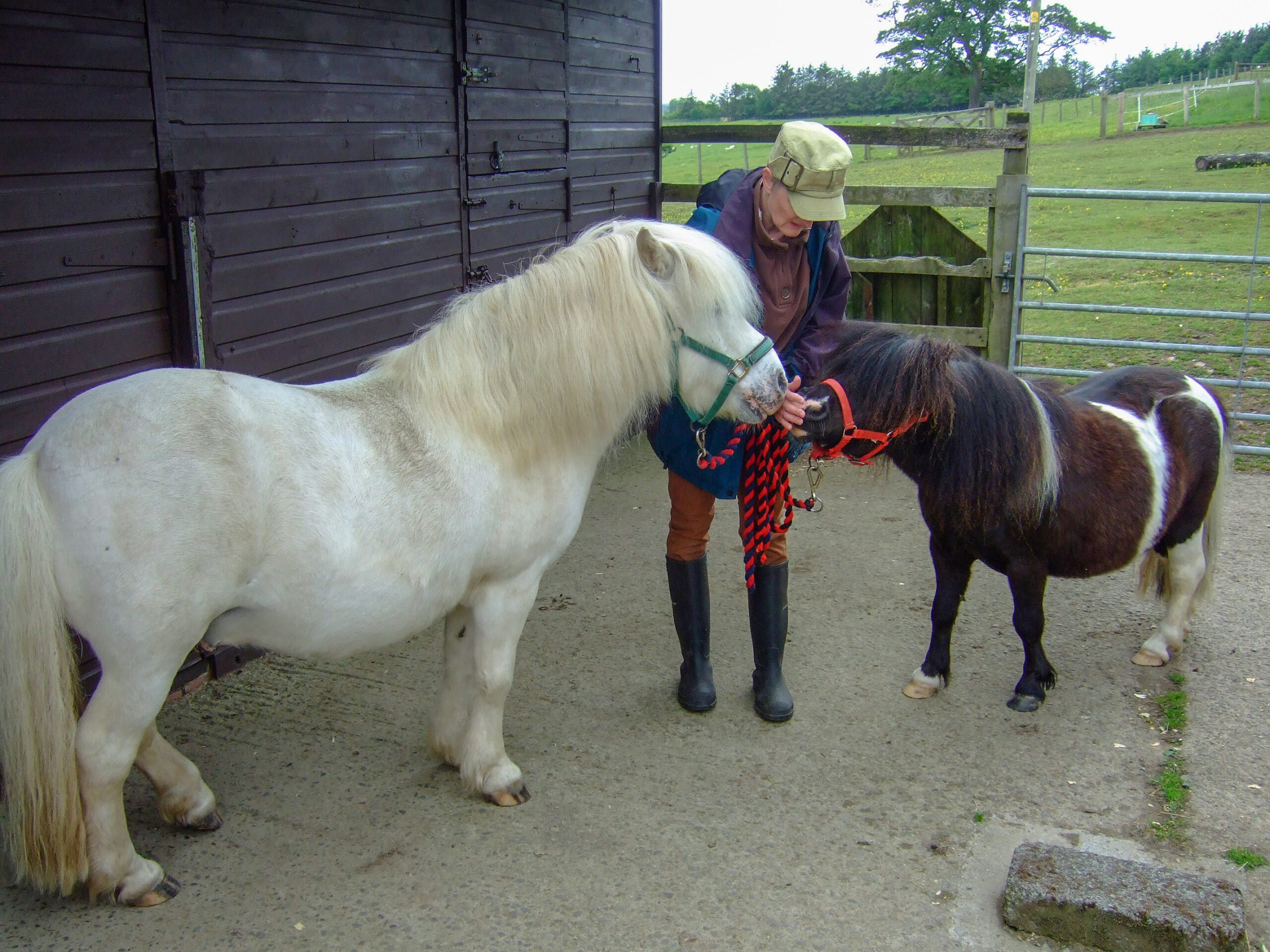 This dynamic duo came to us from two separate abandonment incidents.

Percy, was dumped from a van on the roadside, near to a County Durham Equestrian Centre.

The centre called us with a plea for help and we made arrangements to assist.

Percy was very handsome but a totally testosterone-driven Shetland stallion, who firmly believed he was the equivalent of ten men. We thought this might be the reason he had been deserted!

We followed the abandonment process and then fairly swiftly made arrangements for him to be parted from his crown jewels. He then spent six weeks paddocked on his own but with plenty of neighbours for company.

Percy was becoming quite civil with human beings and we were really pleased with the progress he had made in becoming mannerly and friendly towards us.

However, two months down the line, all attempts to introduce him to companions were failing miserably.

He would attack other horses, often with virtually no warning and even assault those much bigger than himself.

Launching through the air he would viciously grab his ‘opponent’ by the throat and be dragged along by his jaws, refusing to let go. Braver ones would throw him off and then spin to kick him but most were traumatised.

All of this was potentially very dangerous for any person caught in the crossfire.

We were of course keeping him away from mares, but tried him in the company of various male ponies and bigger horses – one of which, a quiet stallion, initially seemed to bond well, then received horrific bites to his neck and chest in a frenzied attack.

We even tried supervised, in hand introductions but that became fraught with problems too.

We did not want to contemplate euthanasia as he had developed into quite a character and was now trouble-free and kind around humans. However, we felt we had to be realistic about his prospects and needed to be able to trust him around other horses.

So, Percy returned to bachelor living while we thought through a potential plan. To cut a long story a little bit short, we eventually decided as a last resort, to turn him out with some large, mature cobs in an established herd and a huge field, with our fingers and toes crossed that neither side would get injured in the mêlée.

Percy was placed in an adjacent field for several days until he stopped strutting along the fence line and started to allow the big boys to investigate him without behaving like an angry Tasmanian Devil. He was, by this time, virtually fit enough to run in the Grand National!

The big intro day dawned and we opened up the field to give everyone new grass and space. As we’d anticipated, Percy received a very mixed reception. Thankfully the big boys stood their ground – most were keen to tuck into the fresh green stuff.

Some gave as good as they got, others were inquisitive but cautious and some were utterly bemused by the hysterical behaviour of this pocket rocket. Suffice to say that for a time, there were injuries. Various minor cuts, bumps and bruises to deal with but thankfully nothing too serious and after several days a truce of sorts was called.

From there, they were left to settle and form relationships and then it was a case of gradually introducing him to new faces. Percy slowly became tolerant of several geldings as his old habits gradually died away.

Enter the tiny but perfectly formed pony, with whom Percy was to become great friends with – miniature Shetland stallion, Bob Too.

Bob Too is a beautifully marked piebald and like Percy, devastatingly handsome. In comparison however, his story is rather less exciting and dramatic but has a really happy ending too. Due to his magnetic personality and good looks, he arrived with two lady friends in tow – they were named Rita and Sue.

It soon became evident that Rita and Sue had been having a romantic time with Bob Too and given that our Shetland collection was rapidly expanding, we decided to see if one of the other equine charities would consider helping us out.

A call to World Horse Welfare in Lancashire was made and they kindly agreed to take Rita and Sue on for us – the new foals would prove to be quite an attraction there.

Bob was duly castrated and unlike Percy, settled almost immediately.

Ship-shape and ready for pastures new, they both started out with a foster home in Stocksfield in Northumberland. Despite being very much loved by the people there, they proved unpopular with the two big cobs they were supposed to be companions for.

A few enquiries, led to a short trip over to Hexham, to a new foster carer, who now affectionately refers to them as Percy Pip and Bobble.

They are both very settled, adored and cared for, having become part of the family.

Percy is now happily shaping up as a lead rein pony, content to take his carers’ granddaughter for walks around the field in bridle and felt pad saddle.

He loves all the fuss and attention he can get and for someone who was sailing dangerously close to euthanasia, he has gone on to prove his worth as a loving and safe best friend for children.

Not forgetting Bob Too, who is busy making great friends too – with the small herd of rescue pygmy goats that also live there. Perhaps size really does matter!